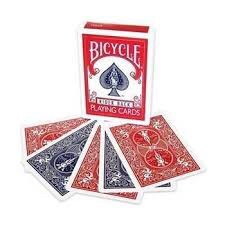 Every few months my Dad, a few Uncles and friends get together to have a card game.  It is very simple, quarters mostly, with a dollar max on the bet.  You can win or lose $50 or so over the course of the night.  The cast of characters rotates, depending on family obligations or other commitments people have.

I can still remember the first time my Dad asked me to play.  I was incredibly nervous.   I thought that since these guys had played for years I would be completely lost, lose all my money and get mocked for not knowing a Flush beats a Straight.  Remember the card you get when you open a new deck of cards that shows you what hand beats what?  I studied that and I put it in my pocket to refer to throughout the night so I didn’t look stupid.  I had played for years with my friends, almost every Sunday night for a few years, so I should have been confident, but I was graduating to the big leagues, or so I thought, so I would look like a dummy.  After a few hands and hearing questions from them like “How many cards do you deal for 7 card stud?” and “Who’s bet is it” I realized I would be just fine!

As with most families, I would see my Uncles every couple of months at a wedding, or Thanksgiving or some other event with all their families.  You talk a little, eat, and tell a few stories and go back home with your family.  During these card games I got to meet them all as individuals.  The way they were outside of being an Uncle.  I could swear you must have gotten a prize for the dirtiest joke you could tell because they would be fighting to get the newest ones out.  And the strangest part is I think my Dad won every time.

My brother and I got to meet my Dad in that setting too.  He wasn’t wearing his “Dad” hat.  He treated us like one of the guys and he let his guard down.   It gave me a whole new appreciation for what he does 99.99% of the time.  He works hard, puts everyone first, and is the rock that we all rely on.  We thought my Dad was a great guy before these games.  But, after just a few of the games we got to know “Joe”.  The kid he was before he was a responsible, respected guy. It was such a cool experience to get to see that side of him.

As the cards get dealt the guys take turns telling incredibly embarrassing stories about growing up.  Sometimes you forget that before all these guys were adults with real jobs and mortgages they were idiot boys trying to find the next place they could steal a few beers from.

As the years have gone on the game has slowed down.  The last hand is dealt a little earlier each time.   There is a ton more bathroom and snack breaks.  The beers for some have been replaced with coffee or water.  My brother and I find ourselves hearing the same story or joke again and again and again because they forgot they told it.  They all have their magnifying reading glasses on because they can’t tell a spade from a club without them.  Lots more “what did you say?” or “who remembers what the wild card is?”  But , you learn that the cards are just a reason to get together, just an excuse to hang with people who know where all your battle scars come from.  During the last game we played my Dad laughed harder than I have ever seen him laugh.  I remember talking to my brother about it the next day and both of us just saying how cool it was to see him like that.  Not a care in the world.

When I first started playing I would end the night by counting the money I lost.   If I was the big loser that night I would go out to my car and my Dad would have snuck a $20 on the passenger seat, because that is exactly who that guy is.  Joe turned back into Dad the second the game ended, always looking out for his oldest son.

As the years have passed the $50 I might lose is easily the best $50 I will spend that week or month. Having a few drinks and a million laughs with the people I get to call family will always be worth it.  Each time my Dad mentions a game coming up I check the calendar and pray there is not something already scheduled. My favorite text I get to send to him is “I’m in”.

Find your tribe!  Get all the time with them you can while you are lucky enough to be on this planet. They hold the keys to your past and they help you shape your future.