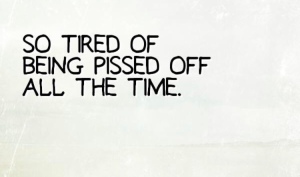 Over the weekend the wife and I were waiting for our coffees at Dunkin Donuts. We ordered and waited and there was a guy who was a few people in front of us. And he was losing it, at first quietly complaining about how long his coffee was taking and as his wait changed from 30 seconds to over a minute he started being louder. Pacing back and forth and swearing about how hard it must be to make a coffee with cream and sugar. Finally ended with him getting his coffee and storming out of the store. This negativity stuck with me all day. How can you be that mad at 7:30 in the morning?

It was a beautiful Saturday morning, what on earth could have made it so this dude waiting maybe 3 minutes for a coffee was going to put him into a frenzy all day. I wanted to say to him “Calm down man, it’s only coffee”, or “beautiful day”. But, I sat in silence. Thinking about it now, I really wish I made an attempt to turn this guys day around. My daughter says he probably would have punched me. But, to me, at least I would have been trying to help this guy out. I don’t get people sometimes…

Last night I stopped to grab a BLT from a local sub shop and as I walking in a guy was speeding in the parking lot, he pulls his car right up to the front door instead of parking in any of the 50 open spots. He got out of his car, left the music blasting and was right behind me. So, I held the door for him and he walked in, ordered his food and waiting. No “thanks” or acknowledgment that someone did something nice for him. As he walked out another person held the door and he did the same thing, head down, no words, back to his car and sped away. I don’t get people sometimes…

I left the sub shop shaking my head. Still thinking about the Dunkin Donuts guy and now I had this moron in my head too.

Then this morning before dropping off my youngest to school we stopped to get a coffee and a bagel. We do this probably once a week, where we just leave a little early and sit and eat before school. Again, I am always trying to steal a few minutes with either of my kids. Nothing special, just 5 minutes of just us. As we walked into the coffee place the door was held open for us. My daughter thanked the person and we ended up holding the next door for someone. On the way out, my daughter held the door open and others did the same for us at the second door. There were lots of “thank you’s” and “have a good days” said.

As we got back to the car I said to my daughter that it really still bothered me that guy from the other day. His negative attitude was crushing me. I mentioned all the nice, small little moments that just happened and all I can think about was maybe that negative guy on Saturday. I was reliving what I thought he did after his coffee was late by 2 minutes. Went home, kicked the dog and was probably a dick to others he came in contact with that day.

I had a teacher in high school once and he was talking about the news. He asked what people thought about the news. Lots of people, including myself, mentioned how the news is all bad. The news is so negative and filled with all the bad things in the world. And this teacher said that we were correct, but that it is NEWS. It is not the everyday stuff. It is supposed to be bad, because there is so much good happening in the world that it is not News. The good is the everyday stuff happening all around us. News is supposed to be whatever is out of the ordinary. It changed and shaped my way of thinking about the news every since that time.

And I think about that right now when I am thinking about the negative guy. I didn’t concentrate on all the nice things happening, all the people who are just good humans, because I see that everyday. I saw the News.

Now, I didn’t let negative guy change my day, but he spent way too much time and occupied way too much of my brain over the last couple of days for my liking.

Don’t let negativity be your norm. Make sure it is the news. Have your negative moments, own them, and try to make sure you aren’t passing them along to other people. And, turn your damn music down in your car when you hit a red light. Have respect for other people. It’s incredibly easy to be a good person.

Okay, I’m done complaining. If you got this far, you gotta do something for me today. Now that I got you here we all have to do something nice for someone today. Can be as simple as a hug to your kid, a kiss for your significant other. Something that makes someone you care about smile.

Oh yeah, and you have to do this tomorrow and the next day and the next. Until it becomes a habit. Be good, do good, small smiles can turn peoples worlds around.

The more hair I grow on my head the balder I look. I shaved my head a few years ago as a “look” and now it completely abandoned me. Hope that made you smile.

Now, pass that shit on.

New blog up... https://weirdbeardblog.com/2020/01/22/circles/. Link in bio to website cause I don’t think I can put a link in a post that works
New post on blog. Link in bio, I’ll be able to link it someday, I just need to invest in a few Russian bots first...weirdbeardblog.com
Cheer Dad stuff....
Great tune... check out his new album he was working on when he passed... RIP
Boys = can you grab deli meat and bread My Meghan = every fruit and veggie on the planet and please try to not use much gas and can you carry the food because plastic bags are bad for the environment... I love her
New story... link in bio. Check it out, or don’t