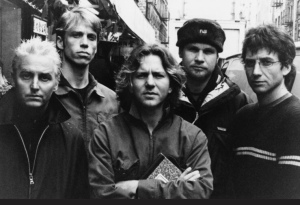 For as long as I can remember, Pearl Jam was my band.  My Dad had heard something about them and bought us their first big cd, Ten.  I’m sure you have heard of it.  It was incredibly popular.  I think it was my Dads way of introducing my brother and I to music similar to what he liked.  He wasn’t connected with Onyx, and Salt n Peppa and Naughty By Nature, but he heard of this grunge band and he saw his chance to get us into his style of music.

Then came their second album, which to lots of people was better than first one.  They became the biggest band in the world.  Them and Nirvana took over the music world.  But, I picked a side.  I liked Pearl Jam so I hated Nirvana.  Still to this day I will turn off a Nirvana song if I hear it.  I love Dave Grohl and the Foo Fighters, and I hear they put on a great show, but I picked my side a long time ago, so the Foo Fighters won’t get a penny of my money.  I understand it makes no sense, but a man has to have his principles…

As Pearl Jam got super famous, as with most bands, they started to get hate.  Each album was “worse than before” according to lots of “music experts”.  But, that never changed my opinion.  I might not have loved the entire album, but they always had 3 or 4 songs that I would LOVE.

And then, I saw them live in concert.  And I repeated this about 15 times.  Each time they came anywhere near my area I would go.  They put on a great show.  But, more than that I connected to their music.  One song reminded me of life with my Dad, another with my brother and some reminded me of death, things I didn’t get to feel unless I was hearing them live.  I’m sure we all have a band that just “gets us”.   Pearl Jam was this band for me.

One summer they came to my area in the beginning of July, I think it was the 2nd and 3rd.  My brother and I got tickets with a bunch of friends and went.  During the shows they announced a 3rd show to happen on the 7th and made a promise to play every song they had during those three shows.  The first two shows were awesome.  We heard songs we hadn’t heard in years.  I was happy with the first two shows.  I was content with how lucky I was to see those.  But, thank god my brother wasn’t. I have no idea how he did it, but he called me the day before the 3rd show and said just him and I were going.  He had gotten amazing seats.  We stumbled across a few friends in the parking lot, because, as I have mentioned before, something about that concert venue was magical.  You never got lost, you were always found by someone you knew.  We had a few beers and headed into the show.  It was one of those nights you don’t forget.  Just two dumb brothers screaming the words to every song.  I remember at one point (sorry kids) some weed got passed to me and I went to take a hit of it but a security guard saw me.  He was walking up the aisle with his flashlight directly in my face.  I was busted.  And then before I knew it my brother stepped in front of me and starting screaming at the security guard that he was blocking the view and ruining the show for everyone and created enough commotion for me to pass the weed along and stay in the show.  The evidence was gone, so the security guard just shut off his flashlight and moved back down the aisle.   The show ended up being great…

Sounds really dumb I know, and it’s not like he didn’t have my trust before, but it was one of those moments you don’t forget.  We have a million memories together growing up, a million more as adults.  He’s the Godfather to my first born, but when we are on our death beds someday and I think of him I will always picture that night.

My musical tastes have moved away from Pearl Jam recently.  I even turned down front row seats to a concert at Fenway Park last summer.  I tried forcing the kids to love Pearl Jam for a few years.  I thought they would love them because I did.   But, I forgot that I hated my Dads music as a kid until he found a bridge for me.  He found Pearl Jam, who then started working with Neil Young, so I loved Neil Young without my Dad having to force him on me.  When my Dad and I went to a Neil Young concert earlier this year it had so much more meaning to me than I ever realized. It was me metaphorically crossing that bridge.

So, with my kids, I introduce a few songs that I like and once I see it on their Spotify playlist I know I am one step closer to getting them to love my band, Pearl Jam.  Hopefully, one day, when I am old and grey one of my girls takes me to a small show that this old band Pearl Jam is playing.  And I get to pretend I am 12 years old rocking out in my childhood bedroom with my brother falling in love with music all over again.