You’re stuck with me…. 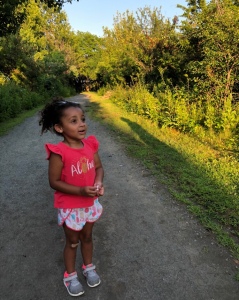 This is a letter to my best little buddy in the whole world.  She can’t read it yet, but hopefully someday she will be able to.  She already knows a few letters in the alphabet so that day is probably closer than ever.  But, she won’t be surprised by anything that is said in this story.  She already knows how I feel about her and she’ll always feel that for as long as I get to be on this planet with her.  And, if I do my job right, she’ll know it long after I am gone.  But, little Maya, if you ever need a reminder of what you mean to me, hopefully this story finds you.

I’ll start by apologizing for posting 8,150 pictures of you on Instagram and facebook.  My kids stopped letting me post about them because they would get embarrassed by me. I know, can you believe they would be embarrassed of me.  I’m literally the coolest guy you know!  Someday, when you are famous for whatever you do in life I will need the proof that I know you so these social media posts will be my way to prove it to all the idiots at whatever local bar or golf course I spent my later years at.

You’re only 3 (almost 4) now, but you have taught me a lifetime worth of lessons already.   Stuff you have no idea about, and hopefully it will be stuff that you never have to concern yourself with at all.  See, I didn’t know anyone like you before I met you.  I was scared of how people would look at us together.  You know, since I am white and you are, as you put it so eloquently the other night “A little bit of both”.  I thought we would get dirty looks or something.  I know, it makes no sense, and my brain must be wired wrong, but I did.  However, something really cool happened along the way.  I noticed just the opposite happening.  Each time we would be together people would stop and say to me how beautiful you were.  How you lit up a room when you entered it.  All these strangers who normally just walk by with their heads down, ignoring the world around them would stop what they were doing and notice you and have to tell another complete stranger about how pretty you looked.  It has happened so often I actually expect it wherever we are and am almost disappointed if it isn’t said.

You changed your Uncle Marky.  You opened his eyes.  You added a new color to his rainbow.  A pretty color he never saw before.

Until you came around, I was always Dad.  I love my kids, like the most you could love any humans, but while we like to have fun and act goofy, I still have to be Dad.  I still have to teach and maintain some rules and laws in my house.  But, you made me an Uncle.  An uncle is a guy who gets to feed you ice cream for breakfast and definitely let you sit in the front seat of the car way before you are supposed to.  Don’t worry Mom, that hasn’t happened yet!  I get to be your buddy, and when you are filled from head to toe with sugar I get to drop you back off for Mom to deal with the aftermath.  I like to think I am an okay Dad, but I KNOW I am a great uncle.  We got this special bond because your Mom asked me to be your godfather.  But, I have this feeling we’d be buddies even if I didn’t have that title.

This weekend was one of my favorites we have ever had together and you will remember none of it.  Friday night was a high school football game.  We go to these games because Meg is on the dance team and her team sits in the stands are cheers on the team and then does a performance at half-time.  Your Mammie and Bupa took you to the game and you were amazed at all the sights and sounds.  The band playing and Meg and her team cheering on the team.  It was sensory overload for a 3 year old.  You got to sit with the dance team a little and mingle with the crowd.  Everybody seems to know who you are and you are not shy about talking to anyone.  But, what I remember is when you saw me sitting in the stands you didn’t hesitate at all, you let go of Bupa’s hand and sat right next to me all night.  You sat on my lap the entire game, except for when the dance team girls asked you to sit with them.  But, as they left to go get ready for their performance you walked right back up to sit with me.  It might seem dumb or insignificant but to me it made my entire night.

And, on Saturday we all went to a birthday party for your cousin, Alice, who was turning 1.  I was there a little earlier than you and I was talking to someone when you walked in.  You started talking to everyone but a few minutes later we caught eyes and the second you saw me you just ran and gave me a hug.  Again, it melted my heart.  All the kids, and all the distractions and all the family and friends you had there and you made sure the second you noticed me that I got a huge hug.

I hope that always happens, I know it won’t.  I learned from my own kids that there comes a point where all adults are uncool.  But, I will always remember that random weekend at the end of September when you made me feel like I was the coolest guy in the room.

This isn’t a big moment story.  This isn’t an accomplishment story.  A high school or college graduation celebration type of moment.  But, someday you’ll know the secret.  Someday you will know that all the little moments are the BEST ones.  Showing someone love isn’t buying them an expensive gift, it’s sitting with them at a football game when there are 50 other people you could sit with.  It’s a facetime call I get from your Mom just so you can talk to me about your day.

I love you little buddy

Categories: Adventures of Me, Family, Maya