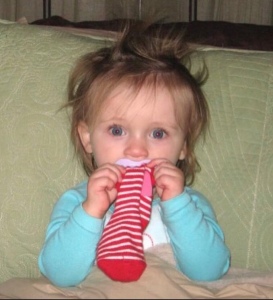 My kids shower at different times of the day.  Mostly at night, sometimes in the morning, but I can always tell when my youngest has showered.  No, it’s not because the shower curtain is never closed shut, or that the mirror is streaky from the towel they used to wipe the steam from it, or even the soaking wet floor because both kids do all of that stuff.  Nope, I know my youngest daughter has showered when I see two little socks on the bathroom floor.

It took me years, but I finally got her to pick up her clothes from the bathroom floor and put them in her hamper.  And when I say years I am not exaggerating.  I’d go into the bathroom to use it and see the clothes on the ground and would yell at her to pick them up.  Then I would just kick them out of the bathroom to the floor in front of her room.  Finally, after the longest training of all time she decided to bring the damn clothes with her.  Now, I’m working on the towel next.  For her, she wears it around her head for a while after getting out of the shower.  And from there the towel ends up on whatever floor is near to where she decides to do her hair.  It’s been months now of me just screaming at her to move the towel from the living room floor.  I have lost this battle approximately 300 times in the past year.  Just going to sit on the couch and there is a wet towel there.  How long has it been there?  Hours?  Minutes?  I will slowly win this battle, but I know I have another year or so of just constantly reminding her to “PICK UP YOUR FUCKIN TOWEL”…

But, these socks I see in the bathroom are a different story.  I don’t know exactly what it is, but I smile when I seen them.  Because I know my opponent has struck again.  Like, you picked up your clothes, why on earth did you not pick up the socks too?  My mind is completely blown by this.  Sometimes there are two socks, sometimes there is just ONE, but there is never ZERO.  I watch as my wife and other daughter shower and bring their clothes to a hamper.  And I peak into the bathroom praying someone saw my kryptonite laying on the ground and tossed it into maybe their hamper.  I take a few steps into the bathroom, pretend I am doing something else and slowly move my eyes to the corner behind the door and I think, maybe, just maybe, this will be my lucky day and my sock horrors are over forever.  I quickly slip into a day dream, filled with clean bed sheets and hard wood floors that have that little hint of lemon smell, but I am quickly brought back to reality when I see that little damn dirty sock staring at me.  I swear it’s laughing at me.  Like, it hid behind the door pretty good, it was teasing me, letting me slip into that day dream when it knew it was just going to be break my heart.

I know what you are thinking.  He’s gonna say how he knows that these little battles will end someday and he’ll smile and think about that sock in the corner of the bathroom and he might even shed a tear about how he misses being annoyed by that sock.  About how he loves his little girl and all her little quirks.  But, right now I am in the middle of a war and if those damn socks find out about my soft side they will know I’m weak.  They will be sneaking into my nightmares long after my little girl is grown and lives on her own.  If I play this right I will forget about the sleepless nights that the socks give me now.  I will have a few years of peace, but when I least expect it, and if I am blessed, someone that calls me Gramps or whatever he or she decides to name me will head over for a sleepover to give their parents a night off and those damn shower socks will make another appearance.  I won’t even expect it.  It will be one of the greatest sneak attacks since the Trojan horse.  And then, and only then, will I smile and think about my little girl all those years ago.

I don’t know how this life will go, I don’t know if I will ever see little feet running around my house when I am old and gray.  I can’t know for sure it will ever happen, but I am sure am having fun right now thinking about just that.  I’ll just tell their parents to send them over in flip flops and that I will turn the heat up so their piggies don’t get cold.  And they will head out to their date night and think “My Dad is so weird.”