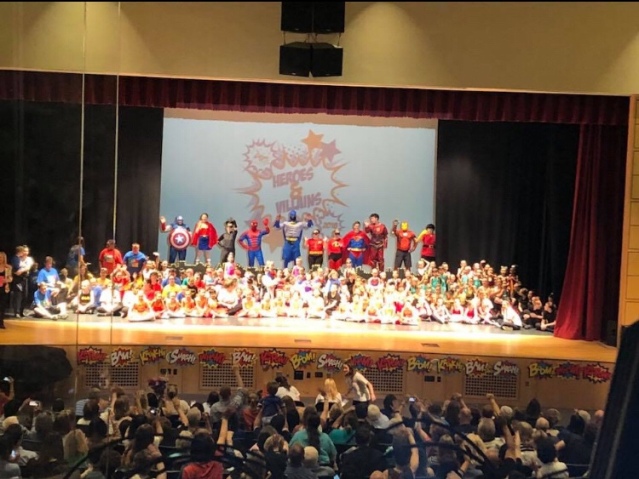 I know I have written about this in past, and I KNOW I will write about it in the future, but I wanted to try and convey just how magical a dance recital is at the studio my kids attend and my wife works at.  The owner goes to great lengths to make the shows incredible.  The routines and the music are picked out and taught for months.  The staff spends hundreds, or probably closer to thousands of hours preparing the kids.  All this work so your child is prepared for the 1 dance they are doing or the 10 dances they might have on recital weekend as they get older.

This year’s theme was Superheroes.  So, the owner and staff get together and start with the biggest ideas.  After they realized that Superman, and Batman were not real and they couldn’t come to the show they did the next best thing and asked a few of the Dad’s to dress up.  I say asked, but I think it was more of an “I already said you would do it, so you would really be disappointing the kids if you didn’t” type of conversation.

So, Saturday arrives and it is incredibly beautiful out.  Or, if you are me, and dressed in an Iron Man costume, it is 200 degrees and you are baking in the sun.  On Saturday they do mini shows. This is a great idea.  Instead of having all the kids in a big giant 4 hour show, they take the little ones and do 5 shows on a Saturday of about an hour each.  They add in a few of the big dancer’s routines and the parents get to be at one quick show and be on with their day or weekend.  These shows are GREAT.  Each time a new class of little kids hits the stage you can feel the excitement in the crowd as the parents get to see their child, lots of times for the first time, hit that stage.

The staff also does this really cool thing where just before the show is to start the curtain is closed and they bring all the little kids on the stage.  They do this so the kids can see what the stage looks like, how it feels, and just to get a sense of what it will be like when the lights are on.  They open the curtain and all the kids get to find their families in the audience and wave to them.  I think it helps the kids to calm down and so they know where to look when they are dancing.  It gets them a little more comfortable with what they are about to do.

As part of the show this year, the Superheroes stood behind all the kids right before the curtain opened.  The kids were all talking to each other, with this kind of nervous excitement and all of the sudden one of the little boys looked at me and said “Hey Iron Man, I have stage fright” to which I responded with my truth “Me too, and I’m Iron Man”. He smiled and I told him he was going to have so much fun out there.  After I left the stage and the kids were dancing I took a second to appreciate how cool a moment that was.  That little boy just needed a little encouragement, so he looked to a Superhero to help him out.  Of course he went out and crushed it on stage, but it got me thinking.  All those kids had their own Superhero every week that helped get them to the stage.  All the hours the teachers put in, all the moments of doubt that they coached through.  I only got to see it once, but they do that with almost a thousand kids over the course of the weekend.  The teachers instill a superpower in those kids to hit that stage.  The superpower stays with those kids.  Being backstage a bit this year, there was a ton of examples of the older kids passing their superpower down to the little ones.  It is really inspiring to see.  The older kids spend so much time with the little ones backstage.  You can see the pride the older kids take in helping the “not so sure of themselves” kids.  The older ones seem to remember what it was like for them, and they know exactly what to say to push the younger kids to try.  I’m so grateful my kids are in this program.

I’ve been to a million recitals.  As the kids get older I get WAY more out of them than I thought I could.  This year for example I got to see my God daughter’s first recital.  I’m not sure who had more fun during it, her, or her entourage of 15 or so that could not stop smiling watching her up there.  It was breathtaking.  But, I will tell you my favorite memory.  My oldest daughter has danced in 10 recitals, summer shows, school plays, literally hundreds of dances, but I got to see her first time on Pointe.  If you don’t know what that is, it is basically when they go up on their toes and dance.  That’s about as technical as I can get on it.  They dance on their toes…shows I still have a lot to learn. If you have seen it, it is pretty cool.  For me, it was like an out of body experience.  She was dancing, and all I could think of was the hours of practice, the sewing of the shoes, her feet taking a beating, the tears from pain, and the tears of joy, all of that, for 2 minutes on stage.  I’m surprised I didn’t drown in my own tears watching that.  After all these years, all these performances she can still turn me into a mess just by floating on a stage like she owns it.

The recital is always on Father’s Day weekend.  I do the obligatory “can’t believe I have to do this on Father’s Day” talk with the guys, but for most of us there I think we realize we are watching our kids live out a dream.  It makes me realize just how lucky I am.  There are hundreds of Dads at the dance studio, hundreds of guys who could have been asked to dress up like a Superhero, go on stage and sweat all day long.  But, I was part of the group that was asked first.  That’s a very humbling thing if you think about it.  My wife, my kids want me to be in their lives.  They want me to make a fool of myself in front of their friends.   Who’s luckier than me??

Find your tribe.  Recognize and appreciate the opportunities the people in your lives give you to be in theirs.  Jump at those chances as you never know when they will stop asking.  Embarrass yourself sometimes.  We are only here once.  Get the most out of it while you can. 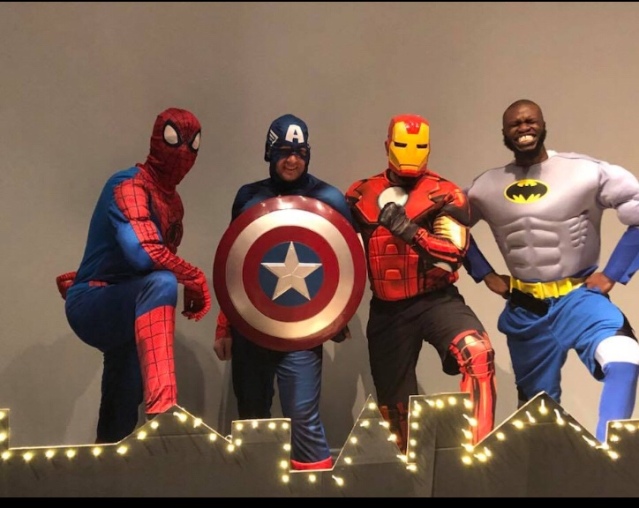