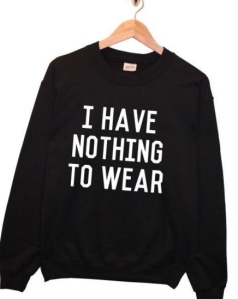 I’ve been thinking lately about my favorite sweatshirt that I own currently.  It is this navy blue quarter zip that I have had for years.  I’m not sure when it became my favorite, when it became the sweatshirt that I would bring everywhere, first to be packed for a trip, always making its way into my car in case the temperature dropped.  I’ve been thinking about it because it is almost time to retire it for good.  The zipper is broken; the holes in it are becoming a little too big to wear in public.  With this sweatshirt being on its way out of the rotation, it makes me think of other sweatshirts that have held the title.  Will this navy blue one be put in my hall of fame with some of the others?

The greatest sweatshirt of all time started out that way because it was comfortable.   It was a grey Old Navy sweatshirt that I “borrowed” from my girlfriend, now wife, a long time ago.   The second I put it on I knew that I was going to be stealing it.  As the years went on and more and more people saw the sweatshirt I found out that my girlfriend had borrowed it from a friend, who borrowed it from another friend.  I have no clue who bought it, or how far back it might have gone.  I just remember feeling lucky that it made its way to me.   I thought about how many stories that sweatshirt could tell and all the places it had been.  I took this thing everywhere.  When it finally was too embarrassing to be wearing I remember being sad it was gone.  I remember being afraid nothing would be able to replace it.  Sounds dumb, that a sweatshirt could make me fear the “next” thing in my life, but it was true.

My oldest daughter was recently cleaning up her room and complaining about not having enough space in her dresser for the clothes she has now.  My wife mentioned to her that if she just got rid of the clothes that didn’t fit her she would have plenty of room, to which my daughter replied “I have lots of t shirts I wanna keep because they mean something to me”. So she lives in a place too small for all her memories. Pretty cool place if you ask me.

Thankfully, I have never had to clean out the closet of a loved one who passed away, but I can imagine that being incredibly difficult.  Most everyone has the same style of clothes, but maybe you have that one or two things that ONLY you would wear. I’m guessing you never think about stuff like that until you are forced to.

My daughter brought a pair of overalls on our trip to Disney recently.  She put them on and I could not stop SMILING.  She had no idea why I was so happy seeing them.  So I explained to her that her Mom used to wear overalls all the time.   At the time I used to think the overalls were dumb and I hated when she wore them.  I remember thinking at the time that the style had passed, but she wouldn’t give them up.   Now, seeing my daughter in them it made me remember my wife back then and made me SMILE.  It is nice to get those little surprises.   My wife and I have been together so long that it is easy to forget some of life’s smallest things.  A pair of overalls can bring me back to being 17, heart racing a million miles an hour trying to figure out if my hands were too sweaty to try and hold her hands.

I think my daughter has it right.  Hold on to the clothes or the things or the people that make your heart happy, but never be afraid to ask your Dad for money for new stuff!  Somehow, no matter how poor we are, there is always a desperate need for the latest fashion.  Then you can decide if that dress or shirt makes it in your hall of fame.  Hopefully ALL your clothes have a story, a story that makes you smile.

Keep finding reasons to smile…sometimes this world sucks, sometimes it isn’t fair.  Sometimes life feels like the universe is working against you, punishing people in your life that don’t deserve to be punished.  Keep your head above water, smile when you can, and always say yes when someone asks you if you want to borrow a sweatshirt.

Categories: Adventures of Me, Dad of girls, Family

How can he top his previous performances in “What’s he wearing now?”...He comes back with cuffed black jeans and Adidas Continentals. What a disaster this kid is. Quarantine day #9993. #WBB
My favorite human turns 40 today! I love you with all my heart Amy. Love who you were, who you are, and who you will become. My forever soulmate, Happy Birthday!
#blackouttuesday Don’t know what this helps, don’t have a solution, just want whoever to know I’ll listen...
Great addition to the bathroom from Amy... #ILiveWithAllWomen #estrogendominance #WBB
Ok, that’s just about enough. Pearl Jam t shirt, new adidas kicks with the Wolverhampton Wolves cap... where does this nerd come up with these lame outfits? What a giant loser... Quarantine day # Whatever... #WBB
Quarantine Day # 9,569... The V Neck, Joggers, Tommy Hilfiger slides with socks... just a unbelievable amount of confidence for such a loser... #WBB