Sing From Your Toes 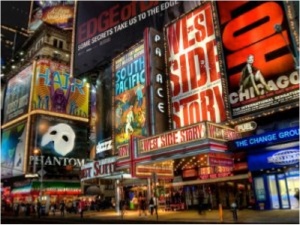 My kids are stage performers.  They aren’t soccer players or baseball players; they are singers, dancers, cheerleaders, and actresses.   It’s a world I am still in complete awe of.   They LOVE the stage.  My youngest is a mess leading up to a cheer performance.  The morning of she and my wife basically scream at each other about hair and makeup until one of them cries.   But, once it is time for her to hit the stage with her team she ALWAYS does well.  Its 3 minutes of gymnastics, flips, pyramids and all this crazy stuff. She is incredibly talented. My heart feels like it is going to explode EVERY SINGLE TIME she is out there.

My oldest is the triple threat, she sings, dances and acts.  She has danced for 11 years or so and each time she does it, probably like any Dad I can only watch one girl on the stage.  I follow her from one side to the other.  A few years ago however, she told me she was going to be in this play at her dance studio.  This was a whole new world for me. They created a new program where the kids would be able to sing, dance and act.  She studied her lines and practiced her songs a million times.  On the day of her show, she was a nervous wreck.  Since I had ZERO experience with the stage I was trying anything with her.  Telling her I was proud of her before she even went on…Telling her she would do great….trying anything to get her to calm down.   My daughter has obviously heard me sing before and she knows I am AWFUL, so giving her singing advice would be the dumbest thing, but I tried anyway and I just said “Sing from your toes”…. She corrected me and said that you are supposed to sing from your chest or something about what her teachers told her.  I was basically just trying to calm her down.  Show her I was dumb and she needed to trust herself and what she had learned and practiced.  Obviously, from my completely unbiased opinion she did amazing.  I cried and life moved on.

Every year since that first show my oldest performs in a Summer Show.  The High School theater director and his wife run a program for the kids in the town.   They call it “A Taste of Broadway”.    They pick certain songs or numbers to perform, all the kids get different rolls or parts and for one weekend in the summer they perform two shows.  They practice a ton and the shows are always GREAT.  The kids are as young as first grade and they also have Alumni who perform every year.  My oldest loves this show. She gets to hang with people she does not see all that often, and she gets to perform with some really great kids and adults.   I love that she is in the show for lots of reasons.  One, very selfishly for me, is that she smiles the whole time.  I can see that this isn’t something she has to do, this is something she loves.  It is very easy to see on that stage that she loves the challenge that comes with being in a show.

This year as she was walking out the door I started to say to her “Sing from your toes” and she cut me off about ½ way thru and said “I know DAD, Kiley (her younger sister) already said it to me”.

Something I said 10 years ago to try and sound like an idiot so my daughter would stop stressing out about a performance has become something I say to the kids before every event they have.  Before I have a presentation at work or something I catch myself saying it to calm me down.  Was a really cool moment for me to get to see the kids carrying on a tradition that I didn’t even know was one.  I didn’t realize until then that they even heard me when I said it.

Sing from your toes.  Words that mean NOTHING to anyone, but EVERYTHING to us.

The small things become the big things.  Find your tribe and watch them live out their passions.  It will pay off for you in more ways than you could ever imagine.

Tagged as: Actress, Sing from your toes, Stage

New blog is up... link to page in bio for Instagram, but link is here for other platforms. Read it, or don’t... https://weirdbeardblog.com/2020/02/24/we-bought-a-zoo/
It’s 8 am Spotify... I’m not ready for this yet! It’s gonna be a good day, that I now know for sure
I love having girls. I’d never ever listen to music like this and it’s awesome...
Kids took Amy and I to The Art Studio Cafe. I strongly recommend this place! Perfect Valentine’s gift from our thoughtful little humans...
New blog is up... link here, but also link to page in bio for Instagram. Read it, or don’t. https://weirdbeardblog.com/?p=1654
I ain’t smart, but I know when nothing in the world makes any sense I can look into your eyes and I’m home... Happy Valentine’s Day to my forever.