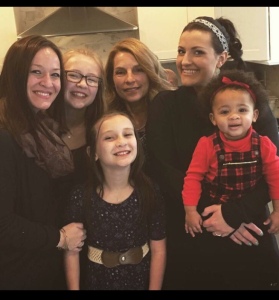 When I was super young my Mom was a nurse at a hospital, working night shifts and weird hours.  Then she would be up with me and my brother in the morning.  Looking back now I have absolutely no clue when she ever slept.

As my brother and I got to be school aged though my Mom switched from a hospital nurse to reviewing and answering insurance/doctors payment claims for Insurance companies.  A job she could do from home.  Mostly Blue Cross or some form of them, they have had a few names, but I think that is where she has worked for the last 30 years or so.  What this meant for us growing up was that my Mom was ALWAYS home.  Up early to get our lunches ready, although I don’t want to give her too much credit here.  I had a salami sandwich, and my brother had a plain old cheese sandwich every single day until high school.  Although, she did have to put the mustard in between the slices of salami because I didn’t want it to touch the bread and make it soggy so maybe that was a little difficult.

My brother and I were SLOBS, as most kids are, and my Mom would clean up after us all the time.   The house was always clean.  For having two gross, disgusting boys, my house always was freshly vacuumed, our toys and hockey sticks always ended up in the right place even though I am positive my brother and I never left them in the same place.   The hockey sticks doubled as guns so they could be next to the hockey net or up in a tree because we were killing some imaginary enemies, but they always were in the spot that they were assigned to the next time we went to play with them.

My mom always worked in her favorite blue chair when I was growing up.   When we would be leaving for school she would be sitting in that chair and when we would get home there she was in that blue chair.  One time she asked us to help clean up and I told her she should do it since she sits at home and does nothing but sit in that blue chair all day.   That was NOT the right thing to say.

When my brother or I would fake sick to stay home a day my mom would treat us like kings.  I probably stayed home because I couldn’t get my hair to stay in place even with the pound of hair gel I used.  My brother would fake sick because he knew if he went in it was his turn to get his desk turned upside down because he was messy.   We would get saltines and soda to settle our stomachs, then watch a soap opera with Mom, then the Price is Right, and then some soup.  My mom DEFINITELY knew the days we were faking, but treated us like we were her patients.   She was always our nurse.

Having boys growing up, my Mom didn’t really get to watch us play house, or play with dolls, but she adapted to us pretty quickly.  She still holds the record for the best Mom to ever play the game Duck Hunt on Nintendo.   Even if my brother and I still think she held the gun so close to the tv it was easier for her to kill the ducks!   My brother and I assumed if you were better than us at a video game it meant you were cheating.

She also got addicted to playing a Mario game in which you had to collect stars.  We would come home and she would tell us “I got the 12th star today.  I found it behind Luigi’s house”.  There was a level where Mario had to slide down this crazy ice slide and my Mom would move her entire body when she wanted to move Mario a certain way.  I can still see her trying to finish that level and laughing hysterically as she fell off the side in the game.  She would sit right on the floor because she knew if she used a chair she would hurt herself falling in real life too.

My mom also got very very heavily into the OJ Simpson trial.  She watched every single second of it.  It was cool because when we would talk about it at school I always had the latest information on it because I think my Mom could have been the judge in the case.

Come to think of it, I wonder if my Mom ever actually did any work when she was home.  Addicted to soap operas, then video games, and then becoming Marcia Clarke, when did she have time for the medical paperwork?   And she did all this in between cleaning up after two slobs and cooking a meal for us and our Dad every single day.  Growing up, my Mom really was a Super Hero.

My Mom was not the typical “stay at home” Mom that you picture in your head.  She was into the stuff her boys were into.   She learned all the “boy” stuff so that she could connect with us.  Playing Duck Hunt or Mario 64, or watching a Bruins game with us was her way in to our worlds.

She’s the reason why I’m into dance recitals, girly movies, ponytails, cheerleading.  That’s my in with my girls.  Funny how life works… I have two beautiful girls and all I want to do is be in their lives.  So, I don’t force them to play catch, I watch and learn whatever it is they are into and I dive all the way in.  I also have a beautiful goddaughter and another niece just born a couple weeks ago.  I’m surrounding by girls, estrogen and all the things in their worlds that I don’t yet understand, but, I learned a long time ago from my Mom that you find a connection any way you can.

My Mom did finally get that girl.  In fact she got another boy and girl a little later in life.  Once my brother and I were a little older, a little bit outside of the “Need Mom for everything” phase, she started it all again with my youngest brother and sister.  So, she raised teenagers and newborns.  I was the first born so I know I was the favorite and I was treated just like I was.  Funny thing is, if you asked any of my siblings who were the favorite they would each pick themselves.  I don’t know how she did it, but she connected with all of us.

I work from home a couple days a week now and I am literally surrounded by my Mom.  I walk into the kids rooms and see the mess and I say something about how gross they are and how they have no respect for the work I do and then I smile because I can see my Mom doing the same thing.   I smile because life is so poetic sometimes.  I smile because I see the work that was done while I was off living my life as a kid.  The plates that magically make their way into the sink, washed and dried and ready for the next meal; the clothes that I see on the floor on Tuesday, which I pick up, wash, dry and fold only to be back on the floor by Saturday morning.  I smile because I am so lucky to have such an awesome person who, while I didn’t know it or appreciate it at the time, was ALWAYS there for me, always invested in me.

My Mom is far and away my favorite person on this planet who doesn’t live in my house…. Wow, you see what I did there?

My family is so lucky to get to learn from such a smart, strong, opinionated woman.   Everyone should have people in their lives that make them better people.  People who teach you what love is. People who invest in you.

If you are lucky like me, you call those people “Mom”.