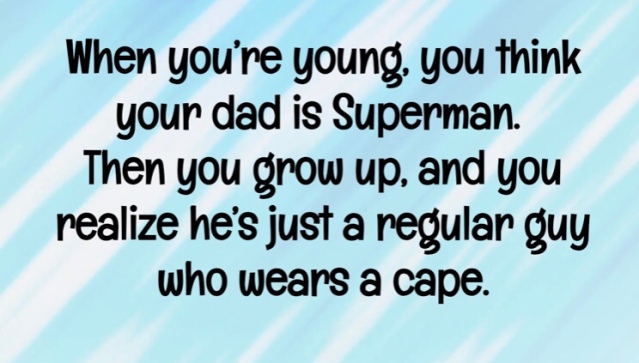 Am I a good Dad? How does someone measure that? What does it mean to be a good Dad? I’ve seen a video of this Dad dressing up in a princess costume to make his son happy and dancing and singing with him. The video is going viral, and he is getting lots of “What a good Dad” type comments. I watched that video and thought it was a bit sad. Not that the Dad would do that, because it’s awesome, but more so for the comments. Do woman really think of us as dummies who don’t care about our kids? Lots of Dads do a million things for their kids. I write stories glamorizing my relationship with my kids, so I look like a good Dad. But, I’ve seen a ton of good Dads and they come in all different styles. Many Dads aren’t the Dancing, Singing Dads, many are “lead by example” Dads.

When I’m at an event for my daughters sure there are more Moms and women there, but there are TONS of Dads. Tons of guys who could be doing a million other things, but watching their kid live their dream on a stage or a basketball court is just better.

Just cause I like to write about them and their stories doesn’t make me a more involved Dad than any other. As I grow up and think back to all the Dads I saw growing up, there is a ton of great examples. I can think of so many great Dads as I am writing this now, so many I see at all the same events I’m “forced” to be at.

I know Moms are the hero’s. They make the house a home, they organize all our lives. They are the glue, the oil that makes the engine run. They are the best, for sure, but there are many Dads out there crushing it.

Lots of Dads, me included, have no idea what we are doing. But, we keep showing up. We are the Uber drivers or whatever other job we discover we can do.

If your reading this and your Dad made you a better person and he’s still around give him a call and just say you love him. If he’s not around anymore then I hope your smiling now thinking of him. Something tells me if he was doing his job right it was easy for you to smile.