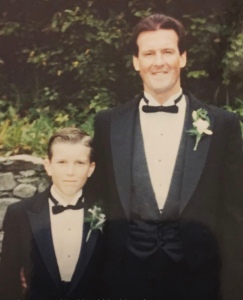 Recently, I went to watch my 8 foot tall 21 year old cousin play in a lacrosse tournament in his final year of college.  It was great that the tournament was local and that lots of my family was able to go and see him.  Although, many of us were completely confused about this weird game, but with my cousin being a giant it was easy to see him on the field.   He is actual 6’8 but most of his teammates were the average PERFECT height of 5’10.  So, he does look like a giant out there. 5’10 is the perfect height though, you can reach everything, but you are not intimidating to woman.  Basically, 5’10 is perfection.   If I keep saying it, it has to be true.  I wonder if you can guess my height. Anyway, he was awesome and his team won the tournament, but that is not what I will take from the weekend.

I got to hang my Uncle John for both the games we saw.  To most, he is just that tall guy who has no problem being the center of attention at games, family events, church, or whenever there is an audience.  To me though, I get to call him my God Father.   This is important to my story because all that silliness I get when I’m around my God Daughter I learned directly from him. He finds the laughter in everything and if it’s not there he has a way of creating it…

I don’t think when my parents asked him to be my God Father they knew what they were getting into.  See, my Uncle John is a lunatic.  But, in the best way possible.  Growing up, he would pick me up at my house on a random day and we would spend the day eating McDonalds, shooting baskets, and hiding from the cops at red lights because he didn’t believe that seatbelts were necessary.  He was the definition of “Fun Uncle” if there ever was one.

As we get older and memories blend together I can’t recall all the car rides and conversations but I do remember what whenever we were together I always felt like I was cool.  He made everything fun, and he always, always made me feel like I was cooler than I was.  Being on his tribe I always felt like I belonged.  Have you ever been around someone that was the most popular person in any room?  I was his side kick back then, so I was part of the cool club.  I was somebody when I was with him.

He got married when I was 12 years old or so.  He asked me to be in his wedding as a junior groomsman.  I can still picture all of us getting ready, putting on that suit and about 15 pounds of hair gel.  As he was hanging out with his brothers, and his best buddies I was in the room.  If there was a joke to be told he was telling it, and he never censored it for me.  After the wedding was over there was a few of us left so we sat by a fire and just talked.  Again, I was on cloud 9. I was important to him. I was part of his life, the coolest guy on the planet to me, and he let me into his tribe.

A few years later, he started a family of his own and I got my first job.  I got to be the babysitter to his kids.  Basically, as long as the kids were alive when they got home I was paid in candy and WAY more money than I deserved.  But, as I got older and was more interested in hanging with my friends he had a growing family.  A family that couldn’t fit in the house in my town any longer.  So, they moved to New Hampshire.  Or, as I remember it back then, they moved to the other side of the world.

I remember thinking back then that I lost my buddy.  I lost the guy who made me cool.  But, I moved on to being a dumb teenager and I remember thinking how lucky his boys were that they got to have him as a Dad.  Each time we would see each other after that he always made it a point to make sure I was still cool.  He’d always remind me that I was part of his tribe.

At all family parties he was the loudest guy in the room.  He would have a million jokes or he would write a story or a poem about something and recite it to all.  He could hold an audience captive wherever he was.  I remember growing up and being so envious of his writing and performing.  He always looked for a laugh whenever he could find one.  I’m a really shy person when it comes to public speaking but he did it so effortlessly.  I always wanted to be like him so one year, I think it was for Dads 50th birthday or maybe even his 60th I wrote a story. I stumbled thru it, cried (surprise, surprise) and got a few laughs.  I was so happy when it was over.  I wasn’t a fan of that stuff, but the only voice I heard was my Uncles who said “Looks like you can take this over now”.  He was again, making me feel like I was the coolest guy in the room.

As life goes, we drift in and out of peoples lives.  He had a family to raise and I started one of my own.  As all of you know, when you get married the holidays become a little more complicated.  The Easter here, and the Christmas there make it so you don’t get to see some of people you love as often as you would like.   The twice a year visits move to once a year.  It’s life. The visits become phone calls or texts and life keeps moving.

When my sister asked me to be a God Father I was overwhelmed with lots of feelings.  But, the best one was that I get to invite my niece into the cool club.  I get to make her feel as special as my Uncle made me.

Getting to watch his 21 year old son play sports this weekend was a big blessing for me.  I watched him in the stands at the game, screaming every kids name and watched as the other parents smiled when they saw him.  He commanded the audience in the stands just had he did every room I could remember us being in as I was growing up.  “That a boy Leachy” or “Here we go ANTHONY” could be heard for miles outside the stadiums.

Lots of people have God parents who fulfill their duties for a few years, buy the gift on a birthday or Christmas.  Some aren’t lucky at all and they have a God Parent who drifted from the family due to whatever and the kid has to grow up without that person.  I have the BEST God Father.  It has nothing to do with the gifts.  He bought them all for me.  It was never the Hartford Whalers jersey or the basketball hoop that made me feel special.  It was just how he made me feel a little taller whenever he was around.  It’s funny to me that all his sons are giants.  They are all way over 6 feet tall and that’s exactly how he always made me feel.  He elevated me effortlessly.  I joke with my kids all the time about how I am 6 feet tall.   I tell them when anyone asks my height that is what they should say.  And they laugh at me and mention how so and so is 5’11 and I am smaller than them.  So, I tell them I act 6 feet tall because that’s the way my God Father always made me feel.

Having people in your life that elevate you, that make you feel cooler than you probably are is so important to someone as you grow.  You grow up with that 6 foot confidence.  I hope someday my God Daughter will have that feeling.  If she does, she’ll have my Uncle John to thank for that.