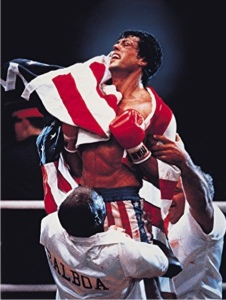 I’ve known for a very long time that I am not a tough guy.  In fact, I remember the day I found out for sure.  I knew from this day on, that if I had to fight I would make sure I had a weapon or I was friendly with enough tough guys that would help bail me out.

One time I was fighting someone who was like a foot taller than me, I was winning I think until we got to the ground.  He got on top of me and was about to punch me a billion times in the face, but he grabbed his throat and started to have an asthma attack.  I bounced up, pushed him and he ran home to get his inhaler.   After he got 50 feet or so away from me I called him a bad name and he turned and said he was going to get his machete and he was going come back and kill me.  I was petrified, but my brother was smart (or really, really dumb) and he said he would be ready and waiting right here for when that kid came back.  I think my brother knew back then if you just didn’t show fear no one would challenge you .  They never fought and I never said another word to that kid.  See, I had known if we fought again I probably would not be saved by an ashma attack.  I learned a lesson from that fight, but that’s not the one where I knew to put my boxing gloves away…

I had a few scrapes before that.  One time I fought a kid over a girl.  He was a gymnasts so back then I assumed I could beat him up cause he was a “wimp”… all gymnasts were “wimps” back then in my eyes.  They weren’t even playing a real sport.  Well, boy was I wrong.  He started kicking me in the fight, and I thought it was supposed to be just fists.  He was getting the better of me, but then one of my friends called him a fag and he turned to see who it was and I was able to sneak in a good punch (for an 11 year old).   He fell to the ground just as the teachers came over to break up the fight so it looked like I won.  I dated the girl for a week or so (an eternity back then) until she broke up with me over something.

But, the time I found out for sure fighting wasn’t for me was in 6th grade.  We had this long walkway that was covered by trees on both sides that lots of kids from my side of the street would cut through to get to school.  That’s where all the bad stuff happened because there was no houses, just woods on both sides of the path.  It was probably only like 30 feet, but when you are in 5fth and 6th grade it might has well have looked like 2 miles long.  Lots of cigarettes and playboys were hidden in those woods.  Lots of holding hands with your girlfriend on that walk before you reached the houses and had to stop doing that so one of the parents didn’t report that back you your parents.

Anyway, one day during school I started making fun of this kid.  I don’t know exactly what it was about, but I played sports and thought I was cool and this kid wasn’t as cool as me.  I’m sure I was the instigator because back then I thought my shit didn’t stink. So, it was decided we are going to fight at the end of the path after school, furthest away from the school so the teachers won’t here all the spectators cheering us on.

Fights back when you are young are awesome.  I remember it being the talk of school all day.  Johnny is going beat up Matt because of “insert really really stupid reason”.  The walk home from school was always better when there was a big fight about to happen.  A cool energy surrounded the whole day and it felt like the school day would never end.  Then it finally would happen, and lots of times there were smaller fights that would happen on the walk because of all the energy kids had.  But, those would be quick because everyone wanted to see the main event.

Anyway, on this day, me and Derek were the main event.  I remember it was a beautiful day.  I remember the sounds of the leaves moving in the wind.  The salami and mustard sandwich I had tasted better than any one of the 8,000 I had eaten in my whole life.  Everything was right, my girlfriend at the time was the coolest girl in school.  Derek and I were the same height, so I knew that he didn’t have any advantage on me there.  We both walked very slowly with our group, our gang.  I had a really close group of buddies back then.  The kind of buddies who, if Stand by Me wasn’t already made,  I could make about my friends.   And I was the big guy today, it was my turn to prove my worth to the gang.

So, we get to almost the end of the path and start removing backpacks and jackets and square up. It’s time for me to beat the crap out of this kid.  Lots of fights just happen, someone hits someone to hard in a football game or something and before you know it you are in a fight.  Especially as kids with how competitive we all were.  Too hard a foul in a pickup basketball game and BOOM a quick couple punches start flying.  But, for this one, it was scheduled.  So I had plenty of time to get ready, make sure my sneakers were tied tight, my hair was in place and ready to go.  I’d give anything to have that 6th grade hair back.  It was PERFECT…

Derek and I finally square up.  People form a nice circle around us.  My brother is there ready to watch me in action.  So, we start with a few angry words to each other to get the blood pumping and before I know it I eat a left punch to the face.  A LEFT punch.  Okay, weird way to start a fight with your dumb left hand, but whatever…. and then another left hits me square in jaw, and another.  I back off for a second and I think to myself, wait, how do I fight a lefty?  I look down at my feet to change my stance and boom,  I get hit with another left.  I try to move closer to him to take away his reach, but as I come in, I get hit with another left and another.  What the hell!  So, I back away one more time and then I know, I have no chance.  So, I do what any wimpy 6th grade boy would do, I turn and run and say “I totally forgot I have a dentist appointment today, I gotta go”.  And I dart for home.   I get there and clean myself up and bit and go to my room completely shocked.  I had never even known a lefty fighter before.  Sure, I’d seen a few lefty hitters in my baseball league, but I had NO answer for that fighting style.  My brother came home and asked what happened and I tried to lie to him to.  Tell him that I really thought I had a dentist appointment but when I got home Mom had changed the day.  He knew… He knew I was not a fighter, and he was proven right that day.  I got demolished.  He was good about it though, never really made me feel bad about getting the crap beaten out of me.

That’s the day I knew I was going be better with words than hands.  Sure, growing up there were lots of group fights.  Lots of bar fights and stuff, but I never was in a one on one fight again.  If a big fight broke out I would make sure I was standing close to my toughest friends.  I could handle myself in those fights because I was smart.  I stayed a little on the outside and picked who I thought was the weaker of the other guys.  If I got in trouble, I was usually saved by one of the tougher guys.  I always envied those guys who didn’t hesitate, who just could fight.  I knew from those 6 or 7 punches I got stung with back in 6th grade by Derek the damn lefty that fighting wasn’t going the skill I brought to my group of friends.  I can still picture how confident I was right before the fight and I can still hear the sound my sneakers made as I was running away, running home.  I remember the color of every house I ran by crying on my way home.

25 years ago like it was yesterday.  I miss those days, well, maybe not this particular day that much.  But, I am right back in that place now, smiling and watching from a far as that first left hit me.  Laughing now seeing how ridiculous I must have looked yelling about a dentist appointment.

We think when bad shit happens as kids it is the end of the world.  Looking back now though I’d love to be back there.  The next day it was like nothing had happened.  We rode our bikes, probably played baseball, stole a few packs of gum from Tedeschi’s and didn’t have any real thoughts or worries about anything.  Our only worry was hoping it would stay light a little longer before we were called in for supper and homework.  I still have some of those guys who I still a few times a year.  But, we aren’t the kids we were, we are the parents we hated.

I drive by my childhood home every once in a while, sometimes I pull the car over and just sit for a minute and just get lost in a moment.  I can still remember my best friends phone # from that long ago.  Weird what gets stuck in your brain.  I love my life now, but I would go back to those times in a second.  I love getting lost in those memories, even the ones where I am not the hero of the story.  Those are what make me who I am.  That’s the day I knew I would need my words more than my fists.

Getting beat up, for a boy anyway, is part of growing up.  I am happy though that my last beating was so long ago.  So long ago I can romanticize about it now.  I could have changed the story and have had this Rocky like ending where I stumble and hit Lefty Derek with a knock out blow,  but i like telling my truth. Plus, all my friends would be quick to tell you they remember when Lefty Derek kicked my ass. Friends don’t let you forget stuff like that.

I miss being a kid….

Categories: Adventures of Me