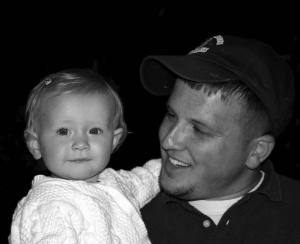 My oldest is at a really cool age right now where she questions everything and is super passionate about politics and government.  Last week I got an angry text from her about Trump, about the wall and how mad she is that it is even something being considered.  Safe to say she isn’t all that happy with the news at this current moment.

My Dad is old school when it comes to politics.  Ever since I can remember when I asked him who he voted for he would change the subject.  I know now to never ask.   I’m not exactly sure why he is like this, but he has his motives and I completely respect it.

As you get older, at least for me, I am more into politics.  Not into in the fact that I would campaign for someone, but into it enough to be educated on what I am voting for.  Living in Massachusetts my vote “doesn’t really matter” on lots of issues, but I still believe in researching and making the small effort to vote.

Lots of years I didn’t do that.  I didn’t care.  I would think that none of it affected me.   But 2008 really reinvigorated me.   I voted Democratic, voting for Obama.  Lots of reasons for it, but I think I just wanted a change to what was happening in the country.  I voted Republican in the last 2 elections for probably the very same reason.  I found out during these last few years that politically I like change at the top.  I lean toward term limits on the leaders at the top.  I totally understand if you have a completely different view, and I get that politics can be a tricky subject to navigate through.

But, I do LOVE to be a bit of a contrarian.  I see it as trying to see a situation from all angles, but my wife definitely doesn’t see it that way.   When she would come home saying something about so and so being awful and how she was mad about a certain situation and I would try to take the other persons side a bit.   She saw it as a slight to her, when she probably just needed a shoulder to cry on.  I have learned over the years to be the shoulder first and then we usually get to have a great conversation after about whatever the issue is.

My oldest and I talk politics all the time.   She’s a Democrat, as probably most Massachusetts teenagers are, and I am currently more of a Republican.   We talk about world issues, sometimes she changes my mind, sometimes I change hers, but lots of times we just end up understanding we can’t change each other and move on to our favorite quote from The Office, or favorite episode of Friends.

But, we talk.  We talk A LOT.  We argue about Trump, legalizing weed, LGBTA bathrooms, or whatever the hot button issue is at the time.   I’m as honest with her as I can be.  Some stuff I think you still have to be a parent for.  We aren’t best friends, I’m her Dad, and sometimes I have to be just that.  But, when she talks I listen, and she has a lot to say.  She loves to argue and knows that if she comes at me with something I will challenge her.  If I say something she doesn’t agree with, she has no problem challenging me.  We are very similar in that way, always looking for that one point that “wins” the argument.

Her grandparents always say that she will make a good lawyer someday.

During our last discussion we had related to politics or the government I could really feel her energy.   I told her that if she was passionate about a candidate in 2020 that I will vote for whomever she wants me to.   I think she probably thought I was kidding, because we do usually end up on opposite sides of a political discussion, but to me, she earned it.  She earned my vote and hopefully I bought myself another 50 years of political arguments with her.  See, she might think she WON by me giving her this vote, but I am playing the long game here.

We talk, we talk a lot, conversations that I love, and I will do anything I can to ensure that will continue for as long as I get to be on her tribe.

The benefits of cleaning, I found my little reflection spot and took care of my mind for a bit. Meditation should be a requirement for humanity.
Link in bio for Instagram... another new story https://weirdbeardblog.com/2020/01/24/mug/
New blog up... https://weirdbeardblog.com/2020/01/22/circles/. Link in bio to website cause I don’t think I can put a link in a post that works
New post on blog. Link in bio, I’ll be able to link it someday, I just need to invest in a few Russian bots first...weirdbeardblog.com
Cheer Dad stuff....
Great tune... check out his new album he was working on when he passed... RIP